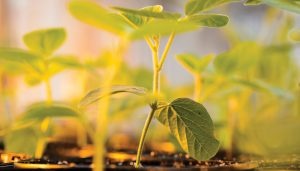 Thirty-five years ago, when CALS bacteriologist Winston Brill and his colleagues set out to exploit science’s newfound ability to manipulate genes to confer new traits on crop plants, the technology was, literally, a shot in the dark.

Working in a facility in Middleton, just west of Madison, Brill and his team blasted plant cells using a gene gun—a device that fired microscopic gold beads laden with DNA.

The idea was to introduce foreign genes that could confer new abilities on the plants that would ultimately be grown from the altered cells. First as Cetus of Madison, Inc., later as Agracetus and still later as a research and development outpost of Monsanto Company, the Middleton lab was, by all accounts, a hub of plant biotechnology innovation.

In December 2016, the $10 million,100,000-square-foot facility—a warren of labs, greenhouses and growth chambers—was donated to UW–Madison by Monsanto to become the Wisconsin Crop Innovation Center (WCIC).

The hope, according to agronomy professor Shawn Kaeppler BS’87—now WCIC’s director—is that the center will add to its string of plant biotechnology achievements as one of just a few public facilities in the country dedicated to plant transformation, where genetically modified plant cells are taken from tissue culture and regenerated into large numbers of complete fertile plants.