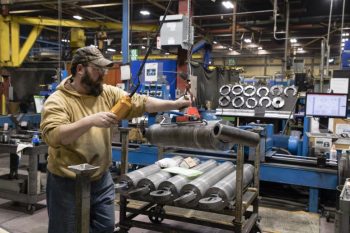 Jeff Roberts directs operations at a JARP Industries, a Wausau manufacturer of hydraulic cylinders for heavy-duty forestry, defense and mining equipment. After many years in manufacturing, he thought he knew what to expect from a course in “lean operations” at UW–Madison Department of Engineering Professional Development.

“I have enough gray hairs on my head,” he says. “I understood that there is a certain way things are always done. I was expecting to learn how to do things faster, but not necessarily differently.”

But JARP owner Kevin Kraft had attended an intriguing, three-day session on lean accounting, and so Roberts took the class – and gained a perspective that turned the traditional approach to machine manufacturing topsy-turvy.

Rather than maximizing production of “baskets” of parts at each workstation, JARP switched to maximizing the flow of parts toward finished products.

The difference sounds subtle, but it’s anything but, says Roberts. “Traditionally in the machining industry, you make baskets of parts.” For example, if the customer orders 10 cylinders, each workstation would make 10 parts, creating a “basket” to be passed to the next workstation. “In lean, we do what we need to make completed cylinders as quickly as possible, with a continuous flow of parts.”

The results speak for themselves, he says. “We have a standard series of steps, going from sawing to weld prep to welding and eventually to final assembly, testing and painting. We want things to flow, we don’t want to saw today, do the weld prep tomorrow, and start welding the day after that.”

Since the company adopted the new approach, called “single piece flow,” average production time per cylinder has nearly been halved, from more than 20 days to 12 days.

The benefits of lean manufacturing are encapsulated in a reduction of WIP: Work in process. To an outsider, WIP looks like forward motion, such as a cylinder sawed, polished and ready for welding. But to an accountant, WIP looks like money spent – for labor, overhead and material – on something that is not ready to be sold.

JARP Industries has 153 employees. Kraft was the first person from JARP to take the lean accounting focus within the lean operations program. As an accountant with an MBA from UW–Madison, he immediately recognized the benefits of speed.

But the benefits of lean manufacturing extend far beyond cost. Offering faster delivery gives customers flexibility so they can order closer to their own assembly date.

Single piece flow heeds a core precept of lean operations — the need to free up the flow of material, says course leader Jeffrey Oelke at Engineering Professional Development at UW–Madison. To meet a second fundamental, eliminating information bottlenecks, JARP revamped its company-wide scheduling system and made it available to any employee at workstations throughout the plant. “We transitioned our entire scheduling system so all employees can see the priority, and it’s more effective than telling somebody ‘This is what you have to do next,’” Roberts says. “This seems like an easy thing, but when you are making 2,500 pieces per day, it’s pretty complex to determine what to do next so a complete cylinder order can be shipped.”

A third key concerns constraints, says Oelke. “You want to improve your slowest area, to focus on your bottlenecks.” That perspective persuaded JARP to upgrade the work cell that makes rod bearings, Roberts says. “We had older machines, and we purchased brand new machines and reorganized how they are set up, and how the operator interfaces with them.”JARP benefited from having several employees take lean courses, says Oelke. “I think JARP is an excellent example of how quickly lean can change the culture and efficiency of a mid-size Wisconsin manufacturer.”

Roberts says Oelke, who spent years accelerating production at suppliers to John Deere’s Horicon lawnmower factory, is “a great resource. He comes from years of manufacturing. He understands my position, and the challenges of survival in manufacturing.”

When the principles and practices of lean manufacturing are compared to the old model of basket production, lean is simply common sense, Roberts says. “We don’t get paid for parts, we get paid for finished products. So why in the world did we focus on making parts?

“I have many years in manufacturing, and being able to go to a two-day class in lean accounting, and to have my mind opened and to be excited enough to invest hundreds of hours in the rest of the lean classes was pretty amazing. And then I was able to take what I learned back to the company to increase productivity and reduce the number of additional employees we needed…. We are getting more done with less.”