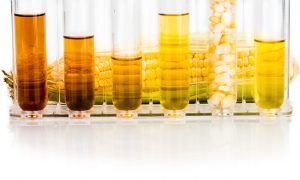 America is a car country.  Drive-in movies, drive-through restaurants, road-trips, carpools: Our culture is full of odes to our automobiles.

And even though people are increasingly trading in their gas-guzzling pink Cadillacs for more efficient hybrid and electric vehicles, our infatuation with our cars means that the United States has an insatiable thirst for fuel, burning through nearly 400 million gallons of gasoline every day, according to estimates from the U.S. Energy Information Administration.

“We all continuously consume fuels,” says Christos Maravelias, the Vilas Distinguished Achievement Professor and Paul A. Elfers Professor in chemical and biological engineering and an expert in chemical production planning and process optimization. “Even when we’re not driving, we need heating or we use products that were transported from elsewhere.”

It’s a lot of fuel. For the most part, it’s fuel that still comes from refined crude oil.

And, for multiple reasons, including the health of our planet and an imperative to reduce our country’s reliance on foreign oil, the United States will need cut back on its use of fossil fuels.

One option that for the past decade has shown promise is the idea of swapping out oil for biofuels made from plants or bacteria and algae.

The United States is sitting on a resource of almost 1.5 billion tons of biomass that could go toward biofuels each year. That’s the energetic equivalent of 4 billion barrels of oil, and given that America uses 6 billion barrels of oil annually, biofuels could make a massive dent in our petroleum consumption.

“We have an amazing opportunity to displace a very large fraction of the transportation economy,” says Brian Pfleger, the Jay and Cynthia Ihlenfeld Professor in chemical and biological engineering and an expert in synthetic biology for harnessing microbes to produce useful products.

The root of the challenge

That sounds great, in theory—but let’s put on the brakes for a moment.

Not all biofuels are created equal.

There are three commonly accepted classes of biofuels, distinguished by the source of organic material, or “feedstock,” from which they are derived.

The so-called “first-generation” biofuels make use of sugar derived directly from food crops like corn, wheat or sugarcane. Second-generation biofuels rely on plant material that’s unfit for human consumption. These include materials like wood waste, corn stalks or a poisonous weedy bush called jahtropha. Third-generation biofuels are made from microbes, like algae.

Perhaps the most well known first-generation biofuel is ethanol, and it’s also the most commonly produced in the United States. In fact, making sugar into fuel is pretty easy: Ethanol production takes advantage of the same chemical reaction that gives humans alcoholic beverages. Yeast happily gobble glucose and produce ethanol as a waste product.

There are problems, though. For one, using crops like corn for fuel drives up food costs. And, ethanol absorbs water, which can cause engine damage. Finally, one gallon of ethanol will only get you two-thirds the distance as the same amount of gas; in fact, its lower energy content is one reason ethanol is almost always blended with conventional fuel.

“We’re not interested in ethanol,” says systems biology expert Jennifer Reed, the Harvey D. Spangler Faculty Scholar and a professor in chemical and biological engineering, who analyzes the chemical reactions living things perform to reveal new synthesis pathways. “The next stage is to move beyond ethanol and look at higher-energy-density fuels, and things that are compatible with modern engines.”

In a way, a turn toward biofuels would represent a return to earlier times.

Before we struck oil, much of our country’s energy needs came from coal and our fuel largely originated from biological sources. Rudolph Diesel, inventor of the eponymous engine, envisioned pure peanut oil as a fuel source for his contraption at the turn of the 19th century.

But when the country discovered crude oil in the mid-1800s, cheap fossil fuels took over.

That means biofuels need to compete with an industry that has a 150-year head-start. And fossil fuels are incredibly cheap.

“Fuels are a low-value product produced with an established, well integrated existing infrastructure,” says George Huber, the Harvey D. Spangler Professor in chemical and biological engineering and an expert in catalysis for converting plant material to biofuels and biochemicals. “The average refinery makes three to five cents of profit per gallon of gasoline.”

Those refineries sell billions of gallons of gasoline every year. That dwarfs the output of most biofuel plants while also undercutting them, cost-wise.

“Being able to make bioproducts at a price that is compatible with current oil refining processes is the biggest challenge for the field,” says Reed. “There are a number of technical challenges, including the upstream processes in producing the actual fuels, and then downstream processes to separate out the useful products.”

One factor in keeping fossil fuel prices low is that engineers have found ways to extract useful products from almost every last drop of crude oil.

“Almost nothing is as efficient as a petrochemical refinery,” says Pfleger. “There’s been more than 100 years of optimization. This is why our field was created.”

In other words, crude oil doesn’t just become the gas in our tanks, but a whole host of chemicals and petroleum-derived products we use every day.

“We are surrounded by various materials made from petroleum derivatives,” says Pfleger. “There are places that might be replaced by bio-sourced materials, but any new material would need to be functionally equivalent and less expensive. Right now, this class of petroleum-derived molecules is very cheap.”

One important petroleum-derived molecule is the chemical benzene, which is used to manufacture several different plastics such as polystyrene, polycarbonate and nylon.

Among many other uses, polystyrene is the plastic that becomes disposable silverware and Styrofoam packaging. Polycarbonate’s durability and transparency makes it ideal for such applications as the barrier windows in banks.

The world used more than 53 million tons of benzene in 2018, and forecasts indicate market demand will steadily increase.

Benzene is one of three chemicals in a mixture called BTX, which petroleum refineries produce from crude oil through a process called catalytic reforming. The other compounds in BTX, toluene and xylene, also go toward plastics and resins like polyurethane and polyester.

Plastics aren’t the only products that keep the price of fuel low. Other compounds left over from the refining process form the foundation for cosmetics and pharmaceuticals.

All this means that fossil fuels have a very firm foothold in the U.S. economy—and if they are to compete, biofuels will need to diversify to accommodate our demand for plastics, perfumes and prescription drugs.

That’s why some biofuels researchers are shifting their focus away from gasoline; rather, they are focusing on bio-based alternatives to some of the chemicals that currently come from crude oil. “Displacing some expensive chemicals might be easier, from an economic standpoint, than producing fuels in a small biorefinery,” says Maravelias. “There’s an interesting trade off, though: We want to replace commodity chemicals, but commodity chemicals are cheap.”

So what is the best way to leverage all of our biomass? Do we focus on fuel? Synthesize bespoke compounds? Or take aim at cheap commodity chemicals?

It’s a question of carbon.

Carbon is currency for petroleum products and biofuels.

Crude oil contains a mix of molecules called hydrocarbons, which are made up of multiple carbon atoms linked together in long, branching or looped chains and decorated with hydrogens. The explosive combustion reaction inside an engine’s piston happens when those hydrocarbons combine with oxygen to form carbon dioxide, water and heat.

Living things on Earth happen to be carbon-based, which is why we can extract hydrocarbons from the sugars and fats that form components of cells. In fact, fossil fuels are the remains of formerly living organisms, transformed into pure hydrocarbons after spending millions of years buried deep underground and subjected to intense pressure and heat.

For one thing, living things like plants and algae contain enormous amounts of water. Even “dry” biomass contains as much as 50 percent water by weight.

Additionally, the carbon in biofuel feedstocks is locked into complicated sugar and fat molecules. That’s one reason the GVL solvent developed by James Dumesic, the Ernest Micek Distinguished Chair in chemical and biological engineering and a world expert in the chemistry of converting plant material into useful fuels, chemicals and solvents, made such a big splash in 2008. His straightforward process breaks plant material into useful feedstock streams.

Even broken apart, sugars from plants always contain additional atoms from substances such as oxygen that are not normally found in petroleum products.

Those oxygens might be biomass’ secret weapon, though. Some high-value chemicals like drug precursors or artificial flavors also contain oxygen, meaning that it may be advantageous to make these products from biomass.

“In some cases, going from biomass to chemicals is cheaper and easier than using petroleum because you’re starting with something that’s closer to the end product,” says Kevin Barnett, a postdoctoral scholar in chemical and biological engineering and an entrepreneur in the bio-based chemicals industry.

Barnett identified one such high-value chemical, a component of paints and coatings called 1,5-pentanediol, during his graduate work with Huber. 1,5-pentanediol can be made alongside ethanol in a biofuel refinery. The process Barnett helped develop produces 1,5-pentanediol at such a low cost that it has the potential to drive ethanol prices down by $2 per gallon.

Working with the Wisconsin Alumni Research Foundation, Barnett spun the discovery into a company, Pyran, and he’s in the process of securing additional funding to grow the business.

Pyran follows in the footsteps of multiple successful bioproduct spinoffs from UW-Madison, perhaps most famously the pioneering example set by Doug Cameron, a professor of chemical and biological engineering from 1986 to 1998.

Cameron found a biological synthesis pathway for the compound 1,3-propanediol, which is now sold as Susterra and woven into a vast array of synthetic fabrics and carpets thanks to its superior stretchiness, soft feel and ability to take up dye.

Another spinoff, Virent, had its origins in the lab of Dumesic. The company uses patented chemistry to turn biomass-derived sugars into a variety of products, including plastics, diesel and jet fuel. Virent was acquired by the oil refining company Tesoro, and its success stories include a partnership with Coca-Cola to develop plant-based soda bottles and a low-soot bio-based jet fuel.

So, what’s coming down the road?

Chemicals are one promising sector where biofuels could make a dent. Jet fuel is another. But cars probably won’t drive the biofuel economy.

“In the next 20 years, the demand for gasoline is projected to peak and then start decreasing,” says Huber. “The largest demand increase is going to be in fuels for heavy-duty vehicles and in aviation, which are primarily diesel and jet fuel.”

Back on Earth, bio-derived chemicals are slowly but surely making inroads in consumer products. While that progress might seem slow compared with the breakneck pace of electronic technology innovation, researchers today are addressing the real-world basic science questions to unlock the full potential of biofuels for the future.

“We have a resource; we have a demand,” says Pfleger. “The question is, how can we move forward?”