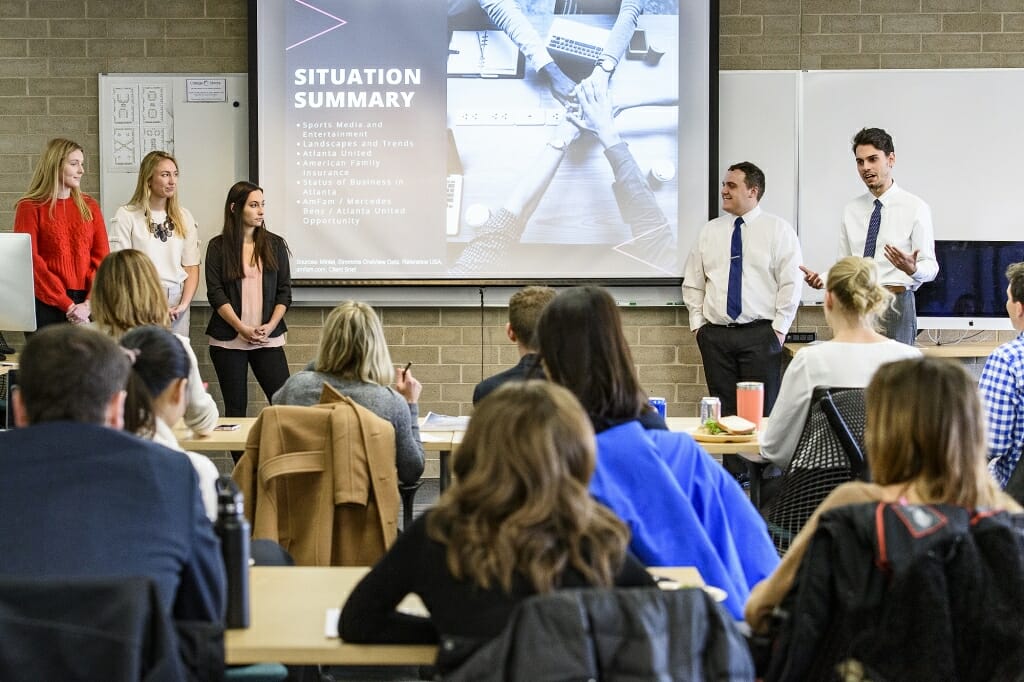 Noting a rise in popularity of digital media, faculty associate Deb Pierce introduced the School of Journalism and Mass Communication’s first-ever digital media strategies class eight years ago. Some of the class’ original students now work as professionals in the communications industry — and Pierce says she expects her current students to follow that same trend, too.

To prepare them for that next step in their careers, the class’ format not only reflects the structure and pace of an actual advertising agency, but it also gives them experience working for real clients. This semester the students worked on a project for Madison-based American Family Insurance, a corporate partner of UW–Madison.

Throughout the semester, students have developed a digital media plan to generate awareness of American Family in Atlanta and to leverage the company’s sponsorship of Atlanta United and Atlanta Falcons, the city’s professional soccer and football teams. According to Pierce, students’ suggestions in past semesters have been implemented by the clients.

“Students in this class work on a real business problem for a real client, so that really ups the ante for students,” Pierce says. “At the end of the semester, students pitch their ideas to the client, so it’s just like a real agency — they always have to be ‘on.’”

Overseeing the company’s classroom project is American Family marketing strategist Bernie Schultz, who along with a small employee panel, briefed students on the company’s challenge, offered them guidance with their final projects and evaluated their presentations. While students learned from the company through the class’ hands-on approach, Schultz says the opportunity was ultimately mutually beneficial.

“We get to tap into some brilliant younger minds who haven’t been in the business world yet, and they’re able to think creatively about things and offer suggestions we may not even consider,” he says. “Some of the research and new ideas they pulled together this semester will definitely be leveraged as we move into 2019 planning.’

Though Marko Uzeirovic and Tenley Joy — two seniors in the class — say it was nerve-wracking to work on a real-world project, they also say it gave them professional and technical skills that they lacked prior to taking the course, as well as insight of digital media from many different angles.

“Deb has equipped students with knowledge of a little bit of everything, from social media strategy to event planning and sports marketing,” Uzeirovic says. “It’s amazing to look back and see all of the skills I’ve gained, all of which I can mention in future job interviews.”

According to Joy, she has already referenced this project with employers, who she says were impressed by the classwork. With the class split up into different groups or “agencies,” students worked together to create an entire casebook and pitch presentation for American Family.

“We’re walking away with actual, tactical proof of what we did in class,” Joy says. “Other classes are very ‘textbook,’ which is great, but in this class, I’m learning skills that I will definitely be able to translate into my career and I’m learning how to work as a member of a team.”

A representative from each “agency” also received the opportunity to travel to Atlanta, thanks to the Anna Krasselt Journalism and Mass Communication Fund, an endowment formed to further advertising education. Uzeirovic was one of four students who spent a weekend exploring the city, attending a Falcons football game and participating in a meeting with marketing personnel from the Atlanta Falcons and Atlanta United.

Without that experience, he says he wouldn’t have been able to complete the project as well.

“It was very surreal — I couldn’t believe a class sent me there,” Uzeirovic says. “It really benefitted not only the projects, but I think every person who went there. We all had something great to take away from it.”

He also notes the freedom students are given in planning their campaigns, which Pierce says is one of the most valuable class components for students.

“Beyond learning to understand their target consumer really well, they’re learning how to use their critical thinking skills to solve any kind of communications challenge they might encounter at the next step of their career — whatever that may be,” she says.

The same students who took the class in its first semester have even come back as guest lecturers, which Joy and Uzeirovic say is a testament to the impact that Pierce has on her students.

“Seeing her influence on students’ lives is incredible and after taking her class, it’s not surprising at all,” Uzeirovic says. “Confidence in a professional setting is something very difficult to teach, but it’s a skill I ultimately gained because of Deb and this class.”

Though Joy’s future career is not particularly set in stone yet, she says she feels much more ready to take on the real world after taking Pierce’s class.

“This class is truly the most transferable class I’ve ever taken,” she says. “I know I have Deb to thank for that.”