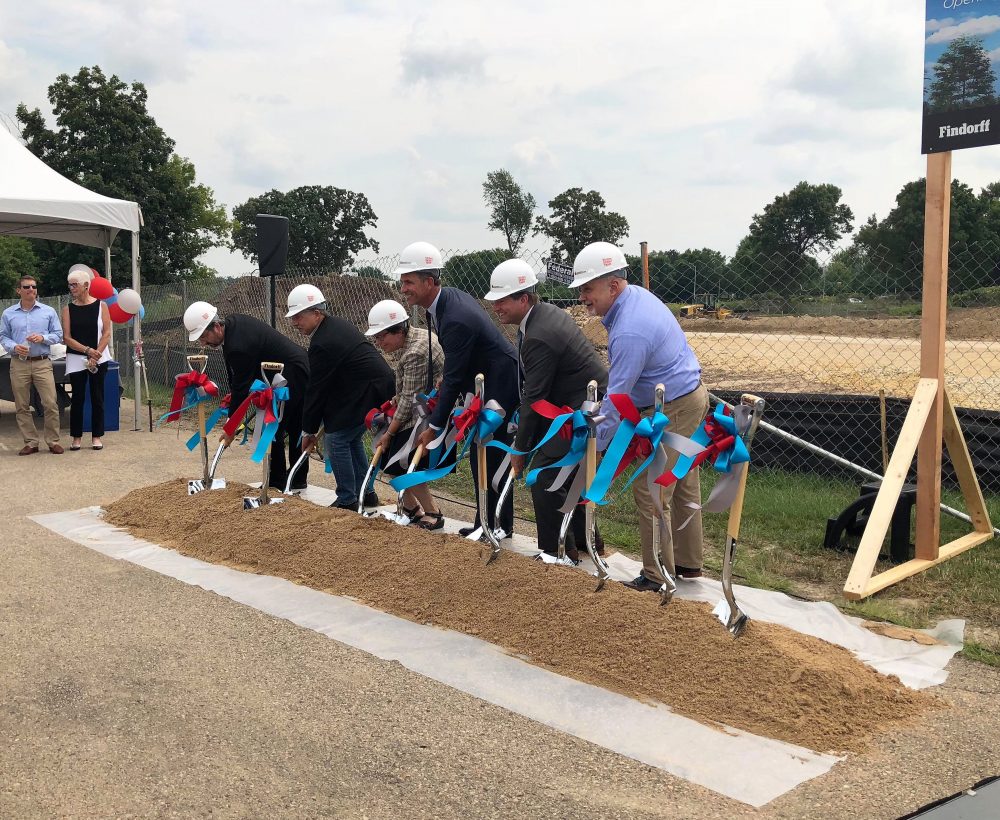 Today’s groundbreaking of a 130,000 square-foot, five-story headquarters for Exact Sciences at University Research Park (URP) is further evidence of the cancer detection business’s commitment to Madison. But the building’s placement also shows that the Park is determined to adapt to an era when high-technology workers show an increasing interest in denser, more urban surroundings. 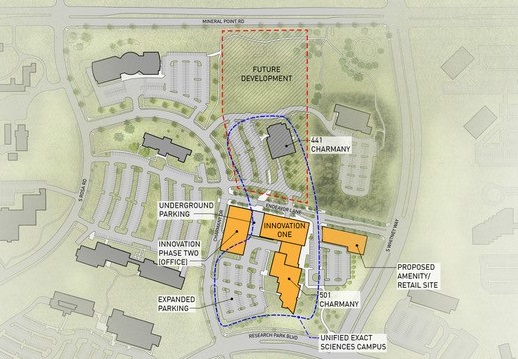 The Exact building, located near South Whitney Way, is expected to house 500 employees when finished in 2020.

“From our headquarters, Exact Sciences will continue to lead the war on cancer through early detection,” said Kevin Conroy, chairman and CEO of Exact Sciences. “Our product pipeline is strong and we expect this site to be home to new breakthroughs in cancer screening and diagnostics that will better the lives of people around the world.”

Exact Sciences has about 1,200 employees in the greater Madison area. The company currently sells Cologuard, a non-invasive test for colon cancer.

“The Wisconsin Idea holds that science and innovation should not remain trapped at the University, but rather should be applied to better the lives and health of the people of Wisconsin and the world,” said Rebecca Blank, chancellor of the University of Wisconsin-Madison and president of the URP Board of Trustees. “In this spirit, we are thrilled to have the advances of Exact Sciences originating from University Research Park and look forward to the company’s continued growth.”

The project includes a new street connection to South Whitney Way – intended to help integrate the park and the city. The development also establishes a natural site along Whitney Way for desirable features that Park tenants cited in a recent survey – a coffee shop, a restaurant and a gym.

With more than 50 acres already devoted to parking at the research park, the new underground garage at Exact Sciences suggests another way to increase job density.

With a workforce estimated at 3,800, the park’s 140 tenants mix major employers like Ultratec and Fujifilm Cellular Dynamics, Inc. with smaller startups like Invenra and Flugen.

The economic and social context of high-tech have changed considerably since the founding, says Park director Aaron Olver. “It was the Cold War, and innovation was often tied to national security: satellites, GPS, fiber-optics, lasers, the Internet. Innovators tended to be cloistered, secretive, and you had to work in your office, tied to a phone line and fax machine. Today, many families have two incomes, life is more complicated, work and leisure overlap, and there is more choice about how and where people work.”

Change is afoot at URP. In 1984, when the University Research Park was founded to benefit the regional economy and businesses related to UW-Madison, dispersed buildings separated by lawns and prairies attracted fast-growing, high-tech companies. Now URP wants to accommodate workers who prefer a more urban environment by evolving toward a denser, “campus” atmosphere.

Indeed, a one-word edit from “park” to “campus” is central to an application to change the “covenant” that founded URP.

The new covenant could increase development in the park from 1.8 million square feet to at least 2.7 million square feet. The new park will be more walkable, transit friendly, and conducive to the chance interactions that are essential to scientific and intellectual progress, Olver says.

Still, URP will continue to focus primarily on lab-focused, science-based business. “The private sector is not in love with labs because they are expensive and hard to re-utilize,” Olver says. “To meet the needs of entrepreneurs, we offer a gamut of offices, from people with a co-working membership who pay to drop in and sit wherever they can find space, to people who ask for a dedicated building, like Exact Sciences. Here, you can start off in a small space and get more as you need it.”

In March, after BrainXell, a UW-Madison spinoff that makes neurons using technology developed in the Waisman Center, raised money and boosted employment, it moved to another building within the park, tripling its square footage.

Olver hopes the ongoing changes catalyze further Madison entrepreneurship. “When you see places that are succeeding, there is clustering. Film clusters in LA, information technology in Silicon Valley. In Madison, we’re smaller, but we see clusters in biomedical sciences and medical information technology, where companies can accrue competitive advantage, and workers can change jobs to match new circumstances. We are trying to help by collecting, densifying and creating mechanisms that help people interact.”

The changes along Whitney Way do several things at once, Olver says. “They give Exact room to grow, start a new road pattern that further opens the park to the public, and establish a new retail site. Rather than turning our back on the major roads, we’re gaining a window into the city.”