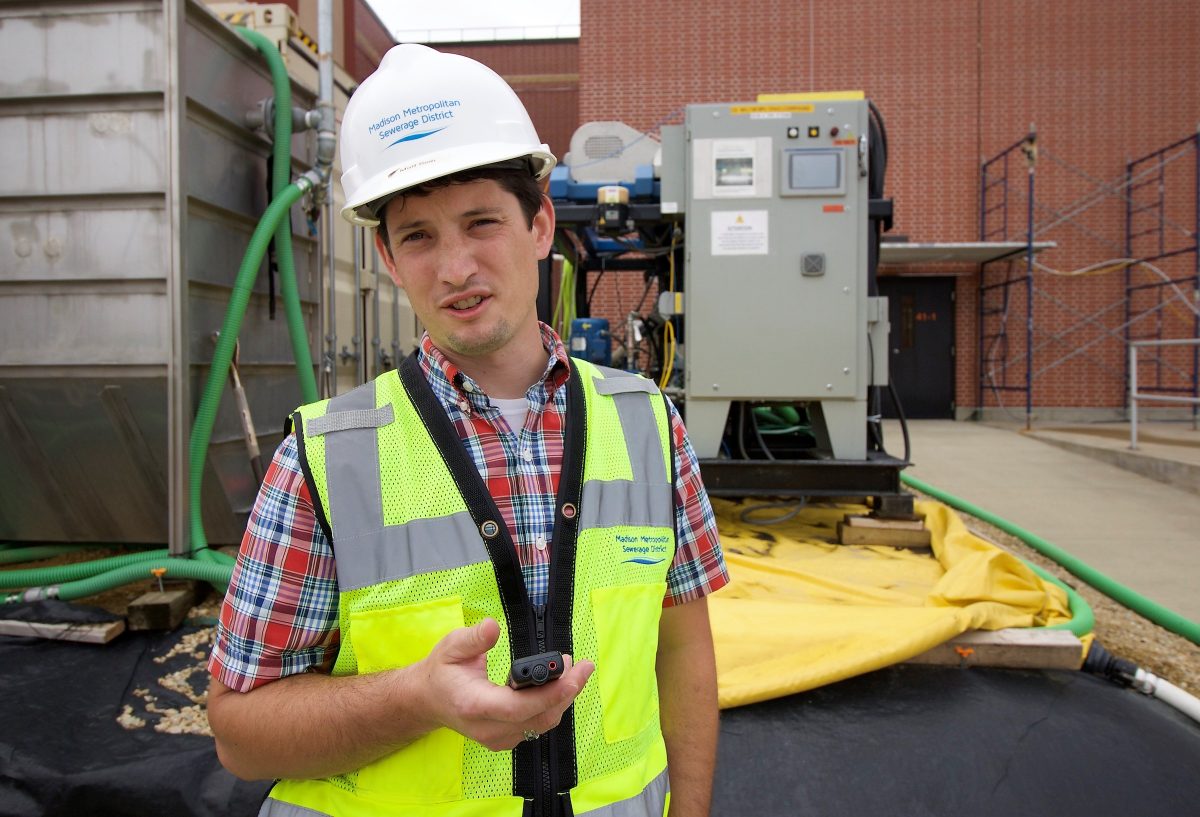 A process invented at UW–Madison is now removing phosphorus at Madison’s regional sewage treatment plant. Like many other advances from the colleges of agriculture and engineering, this one is designed to reduce the cost and environmental consequences of wastewater treatment.

The system, the brainchild of soil science professor Phillip Barak, focuses on reducing releases of phosphorus, a plant nutrient that feeds overgrowths of algae in lakes and streams. The system may also improve pipe flow in the Madison Metropolitan Sewerage District (MMSD) treatment facility by reducing the accumulation of phosphorus compounds.

Barak’s Nutrient Recovery and Upcycling (NRU) pilot handles about 5 to 10 percent of the treatment plant’s throughput, and creates 200 pounds of brushite (a solid fertilizer) per day.

It’s seldom a topic at dinner tables, but civilization fails without wastewater treatment. In the Madison area, the flush ends up at the District’s headquarters south of the Beltline. Here, large pools containing an uncountable number of microbes break down complex molecules. Within days, pathogens are neutralized, liquid fertilizer is ready to be knifed into farm fields and a stream of clear, disinfected water is coursing toward the Rock and Sugar rivers.

The relationship between the sewer district and the University of Wisconsin is at least 90 years old, says district chief engineer Michael Mucha, and it began with methane, a gas byproduct of the microbial digestion process. “We have an article from a 1930s Wisconsin State Journal story reporting that power plant engineers attending the university ate hamburger sandwiches cooked over a sewer gas flame thanks to a new method of trapping the gas,” Mucha says.

Today, the plant burns enough methane to supply one-third of its electricity.

“UW–Madison has always been there for us with expertise, and we have given back by offering practical knowledge of management, technology and leadership.”

“It’s been a seamless relationship,” Mucha adds. “UW–Madison has always been there for us with expertise and knowledge to help us with projects. We have given back by offering practical knowledge of management, technology and leadership. Our work together has supported student learning, advanced the technology, recognized the human element of change and made the plant safer, cleaner and more efficient.”

Over the years, a revolving door between the district and the University has benefited both sides. For example, professors Paul Mac Berthouex, Edward Schten and Lawrence Polkowski were long-time commissioners for the district.

Ned Paschke, who is now in the department of professional development at the college of engineering, was the district’s director of engineering for 18 years. Paschke notes that the district adopted ultraviolet (UV) disinfection for wastewater in the early 1980s, with the guidance of UW–Madison leaders and engineering alumni including Jim Nemke, Paul Nehm and Jon Schellpfeffer. “The idea was to replace chlorine, which can carry serious health and safety concerns,” says Paschke. “When the district installed the new UV system, it was the largest of its kind in the world, and people would come from all over the country and world to observe the system.”

The story, Paschke says, “is a great example of technology and engineering science being used to benefit the public.”

A second district pilot project aims to reduce the amount of oxygen needed by microbes during treatment. The project is led by Daniel Noguera, a professor of civil and environmental engineering who says he began exploring how bacteria decompose ammonia about 15 years ago.  “Even though the textbook said it would never work, I began wondering if some microbes could decompose sewage at lower oxygen levels.” Working with samples from the treatment plant, his lab proved the impossible possible, leading to a process needing only one-tenth the usual level of oxygen.

The tests in the district pilot plant could be a big money-saver, says Mucha, since the blowers used to supply air to the treatment process are the district’s single biggest electric load.

“The questions I try to solve with the district are questions of practical importance to them,” says Noguera, “but from the university’s point of view, these collaborations allow us to train our students, and address questions that are more scientific. What is the organism that’s doing this decomposition, and why does it work that way?”

As the environmental harm caused by excess phosphorus becomes more apparent in carpets of algae in lakes and streams, wastewater systems are being asked to tighten controls.

Support for the technology development and the pilot plant has come from NRU, its business partner Centrisys/CNP, the United States Department of Agriculture National Institute of Food and Agriculture, and the Wisconsin SBIR Advance program. The District has provided in-kind support.

Eventually, either the phosphorus extractor, the low-oxygen process, or both, could become standard processes at wastewater utilities. That example – of UW–Madison ’s contributions to successful technologies – appeared long ago in the district’s system for recycling the solids remaining after treatment. These biosolids are rich in organic material, phosphorus and nitrogen, making them an ideal soil amendment for agriculture. The district’s biosolids program, known as Metrogro, manages the application on 5,000 acres in Dane County and surrounding counties, with close attention to application rates, soil type, field condition and slope.

In the 1980s, to address concerns about possible contamination by heavy metals like lead and mercury, UW–Madison  soil scientist Art Peterson began testing how these metals moved from the soil to crops, and reached a counter-intuitive conclusion: Applying the solid remainder, then called “sludge,” would reduce the lead uptake into plants, presumably due to the improved microbial environment in the soil.

A program like Metrogro, which solves an inevitable problem at the district while improving soil health, water retention and crop yields, demonstrates a new way to view the district’s role, Mucha says. “We are going away from the public perception that wastewater is a bad thing – that you flush it and it goes away – to viewing it as water containing renewable resources that can be reused for society. Already, 99.9 percent of what comes in is reused. We create clean water that is returned to the environment, recover three different forms of nutrients that are used for crop production, and we create renewable energy. In many ways, we are in the food-water-energy business. It’s a complex task, a multi-dimensional balancing act, and to accomplish it we welcome our long-standing partnership with UW–Madison.”