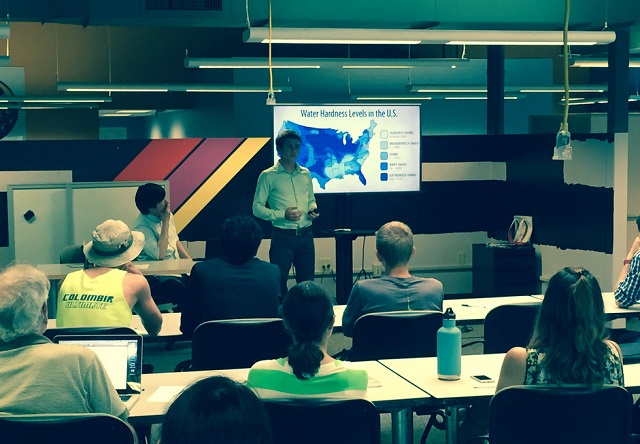 A “pitch night” at the Madworks business accelerator on campus made significant monetary awards to two Madison businesses with roots in UW–Madison Monday.

Emonix won the $5,000 economic impact award for a patent-applied-for system that reduces salt usage in water softeners. The device connects to the water softener and detects softness after treatment, preventing over-softening.

The technology, designed by co-founder Neil Klingensmith, a UW–Madison graduate student in electrical engineering, is suited to apartments and commercial buildings.
Emonix, winner of this week’s pitch prize at UW–Madison, hopes to save a mountain of salt through its water-softener technology.

Emonix, winner of this week’s pitch prize at UW–Madison, hopes to save a mountain of salt through its water-softener technology.

A system installed in Chadbourne Residence Hall at UW–Madison saved $4,000 in salt costs over the first six months of use. Emonix already has 12 paying customers and plans to work with distributors of water softeners, says co-founder Zach LaVallee, a senior in mechanical engineering. The award recognized the company with the greatest potential to use the additional funds to create the greatest economic impact in Wisconsin.

rd for the company with the best plans to use the money went to WeightUp Solutions, a Madison firm that designs and produces a system to monitor the motion of weightlifters. “Don’t lift more, lift better,” says Litvak. WeightUp is now in use by 1,000 athletes, he says, in 24 sports, including football.

The 10-week Madworks Seed Accelerator program is housed at the building called @1403 on University Ave., a campus hub for entrepreneurs sponsored by University Research Park.

The program was designed to fill a gap, says co-founder Anne Smith. “Businesses get started and their founders know how to pitch and raise money. They may be selling some product, but they don’t know how to run a company on a day-to-day basis. But while they are learning to run the company, they still have to sell the business. We don’t want them to lose the skills that got them to where they are now.”

The award for best presentation went to Nick Mastronardi, founder of Polco, a system used by municipalities to solicit comments on civic issues and policies. “Policymakers know how the few people who show up for meetings feel, but not how the broader majority of voters feel,” he says. “We’re trying to fix a broken process.”

The awards were funded by the Wisconsin Economic Development Corp.