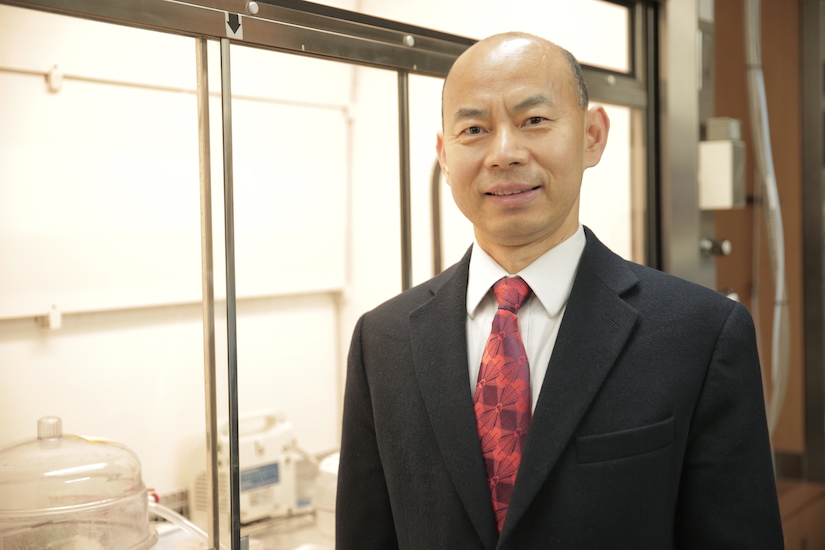 It’s not uncommon for Zhenqiang “Jack” Ma to work late and sleep in his office.

The microwave, refrigerator, treadmill, sofa sleeper and sleeping bag in the Lynn H. Matthias Professor and Vilas Distinguished Achievement Professor in electrical and computer engineering’s University of Wisconsin–Madison office are testament to his drive. He has a tendency to wake up at 3 a.m. when the answers to his research questions come to him. He then texts his ideas to his team – some students, after all, are still up at 3 a.m., although he never expects that.

Ma has had more than 30 graduate students and post-docs working under him at one time. He has nine federal grants ongoing now, although he is on sabbatical, but at times has had up to 18 grants underway in a calendar year.

Working those hours has made Ma a serial innovator, with more than 40 patents, more than 470 published papers and a half-dozen national professional fellowships — including The Optical Society, American Association for the Advancement of Science, Institute of Electrical and Electronics Engineers, American Physical Society, and National Academy of Inventors. He has acquired about $49 million in federal grants as a principle investigator.

Ma’s enthusiasm for his research is both intellectual and deeply personal. A graduate of China’s Tsinghua University, Ma hails from Shandong, a province in eastern China that has sustained a culture since the time of Confucius — perhaps its most famous resident — that reveres the pursuit of knowledge.

When he was young, Ma says, his parents would tell him that nothing is more important than knowledge.

“I enjoy doing research, and when I come to my office it is with strong eagerness,” Ma says. “The more I work, the more interested I become. I’m not short on ideas. I’m short on time to do everything that I want to do.”

That’s why he takes advantage of the benefits UW–Madison offers. He cites strong leadership, an impressive research infrastructure, excellent faculty and support for multidisciplinary collaborations as reasons he has been successful. In fact, he has engaged in more than 60 collaborations during his 16 years at UW–Madison — half with on-campus researchers.

“I’m not short on ideas. I’m short on time to do everything that I want to do.”

“Jack is a champion for collaborative research at UW–Madison,” says Norman Drinkwater, UW–Madison interim vice chancellor for research and graduate education. “His partnerships include on- and off-campus collaborators, and the results of these meaningful connections are solving decadeslong problems, stoking the pace of research discovery, solidifying UW–Madison’s important role in innovation across disciplines, and moving the Wisconsin Idea forward. I commend Jack for his efforts to patent his innovations so that they can be brought to market and better impact people’s lives.”

One of those strong collaborations is with the Wisconsin Alumni Research Foundation (WARF). Ma recalls that shortly after he came to UW–Madison in 2002, he was approached by Stephanie Whitehorse, WARF Manager of Intellectual Property Operations/Senior Intellectual Property Manager, who explained the role of WARF, the procedure for filing disclosure and the steps toward patenting.

“Jack is an exceptional researcher who is always teaching us something new,” says Whitehorse. “He is a prolific inventor in his field and we are eager to see his innovations reach their full commercial potential.”

Ma has also served on the review board for Discovery to Product (D2P). Part of UW–Madison’s Office of the Vice Chancellor for Research and Graduate Education, D2P helps entrepreneurs and innovators on campus find and leverage resources, fosters collaborations between UW–Madison and WARF, accelerates the commercialization of campus innovations, and works to transform the campus culture to cultivate entrepreneurship.

In his role on the D2P oversight committee, Ma interviewed counterparts at other universities to see how they accomplish the work that D2P does.

“We have D2P and WARF. WARF is dedicated to patents and filing licenses. D2P is dedicated to taking IP to the market,” Ma says. “That’s very unique among universities, and creates a strong foundation for entrepreneurship.”

Ma recommends that others on campus who are looking to move their ideas forward talk to WARF about patenting and licensing early.

“Think about your papers before you publish them and ask if there is anything to be patented from it,” he says. “From there, talk to D2P. Working with WARF and D2P can save you time because they are the experts. There are lots of other resources on campus, and WARF and D2P can help you connect to them and others off campus.”

Ma believes commercializing ideas that come out of UW–Madison labs is good for society and in keeping with the Wisconsin Idea — that the university should benefit the lives of people beyond the boundaries of its classrooms.

“I think many other universities could learn from the Wisconsin Idea. As a public university, we are serving the public, and I think doing it very well,” he says. “WARF and resources like D2P are the ways to make the Wisconsin Idea happen. Sometimes we make a discovery, but we do not have an idea for the best application for it. But then we talk to a faculty member in the medical school or an area of engineering and find out they have been looking for that exact solution.”

A recent Ma collaboration has been with David Gamm, a UW–Madison professor of ophthalmology and visual sciences. Ma’s wife is UW–Madison biomedical engineering professor Sarah Gong. She helped make the connection with Gamm and is co-principal investigator on their project, “Bioengineering Micro-Patterned Scaffolds for Human Pluripotent Stem Cell-Based Photoreceptor Replacement Therapies,” to address degenerative vision loss.

In 2014, when Ma and collaborator Justin Williams, UW–Madison professor in biomedical engineering and neurological surgery, announced in the journal Nature Communications that they had developed transparent sensors for use in stimulating and recording signals from the brain, requests came flooding in from research groups asking for the devices.

He’s also been following in the footsteps of prominent physicist Herbert Kroemer who, in 1957, proposed the concept of the semiconductor heterostructure, now critical to technology such as lasers and modern communications equipment. In 2000 Kroemer and Zhores Alferov won the Nobel Prize in physics for developing semiconductor heterostructures used in high-speed- and opto-electronics. In 2014 Hiroshi Amano with Isamu Akasaki and Shuji Nakamura won a Nobel Prize building on that application for the invention of efficient blue light-emitting diodes, which has enabled bright and energy-saving white light sources.

But there is one problem they didn’t solve — and Ma has. Since 1957, people have wanted to “graft” unlike semiconductor materials: lattice mismatched semiconductors.

The solution has led Ma and his collaborators to address applications in new semiconductor materials and electronic devices that cannot be addressed in any conventional ways. In 2014, Ma and his former graduate student Jung-Hun Seo patented the solution with WARF’s help. Ma has been applying the new “grafting” technologies to solving various long-standing semiconductor device challenges with success. Seo earned his doctorate in electrical and computer engineering in 2014 and is an assistant professor in the Department of Material Design and Innovation at the University at Buffalo.

“Commercialization takes time, and I don’t want to slow down the innovation part of my work right now,” Ma says. “I have to find a balance, and right now I am networking and hoping to double my patent number over the next three to four years.”

But when he is ready to move his ideas to the marketplace, he knows UW–Madison has the resources to help.

“The patents that I have right now are very broad but the potential for commercialization is huge in the future,” he says.

Ma says he is most proud when his students are successful and most happy when he has solved a long-lasting problem.

“I jump in my office when that happens,” he says. “Maybe in the next 40 years — by the time I’m 89 — I can realize several more major breakthroughs. I want to leave a mark. That’s the drive for me. I never want to retire. This is my life.”