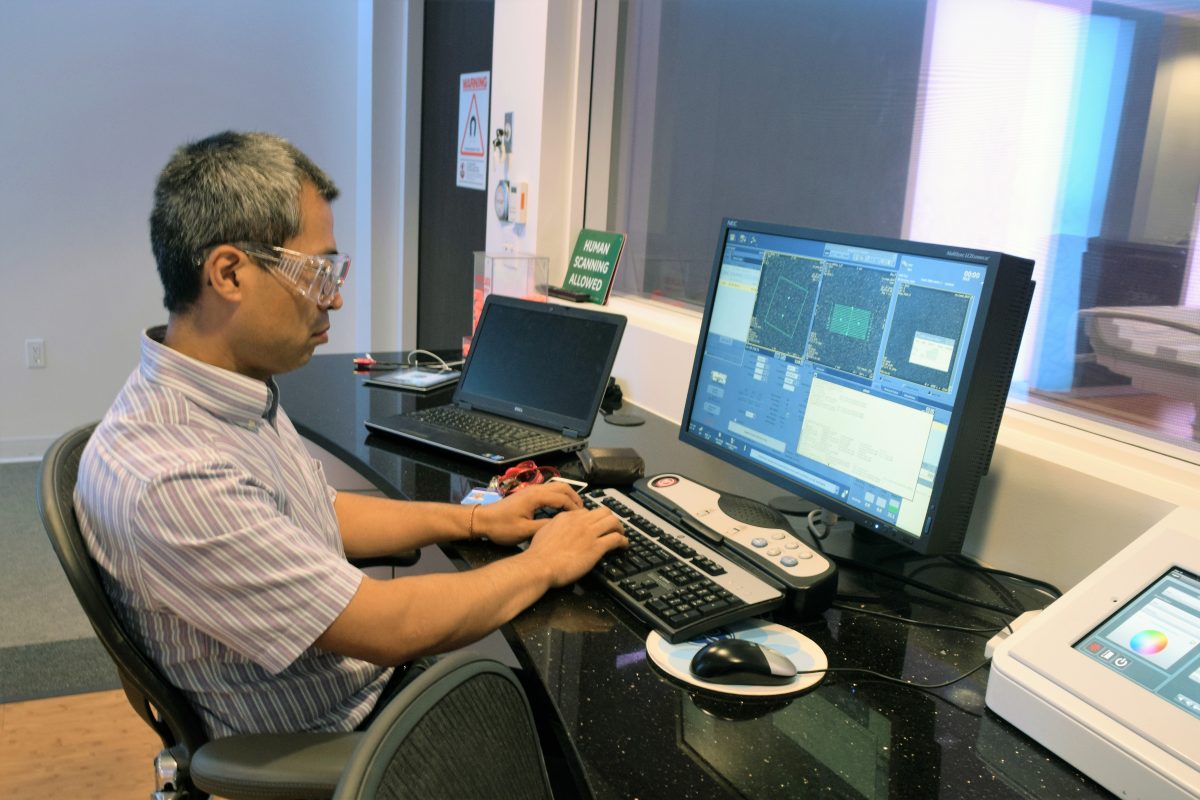 The first time John Wiley passed out, in 2013, he fell flat on his face in a welding shop. He figured he’d tripped on the gas hoses, but his doctor disagreed: “You were unconscious before you hit the ground. Otherwise, you would have put your hands out for protection.”

After his second fall, Thomas Grist, a physician and professor of radiology at the UW-Madison School of Medicine and Public Health, saw Wiley and began to suspect “subclavian artery steal,” meaning that an artery was hijacking blood destined for the brain. “John is a hobby welder, and he’d been working on a sculpture, with his arms overhead, which is a classic scenario for this syndrome,” Grist said. “The blood goes to the arms; it’s stolen from the brain, and that causes fainting.”

The syndrome was difficult to diagnose, but Grist had a trick up his sleeve, one that he’d helped to invent decades before. Called 3D TRICKS, it is a technique that tracks blood flow in a magnetic resonance machine.

Like good number of medical imaging inventions from UW-Madison, TRICKS has been licensed to GE Healthcare. This giant in the world of medical imaging is an $18-billion division of GE that designs and makes some of the world’s most advanced scanners at its headquarters in Waukesha.

Since the 1980s, GE has supported research into imaging technologies at UW-Madison. The latest agreement, a 10-year, $34-million contract, began in 2012 to fund radiology and medical physics researchers, who work on campus with the company’s newest CT (computed tomography), PET (positron emission tomography) and MR (magnetic resonance) scanners.

In addition, GE hires a lot of Badger graduates. UW-Madison has historically been one of the top ten global universities in total number of alumni working at GE, according to company officials.

3D TRICKS is one of a long stream of inventions – for X-ray, MR, and CT and PET scanners, that have emerged from the world’s largest department of medical physics, and its parent, the department of radiology.   A multi-decade relationship between UW-Madison and Wisconsin businesses like GE has created a stream of medical imaging inventions that look inside the human body with increasing accuracy to diagnose tumors, heart disease, osteoporosis and countless other conditions.

For patient Wiley, the 3D TRICKS results were clear, Grist says. “We saw that the flow in the artery was backward.”  After a stent was inserted to expand the subclavian artery, the fainting disappeared, and Wiley, who maintains his passion for welding, left the problem in the rear-view.

It’s fitting that Wiley benefited from the partnership. As chancellor (2001 to 2008), Wiley ardently espoused the University’s role in advanced technology, and indeed, was co-inventor of a technology used in essentially all high-speed computer chips. This spring, Wiley learned with satisfaction that the diagnostic trick that Grist had used to catch the felonious artery was invented at the School of Medicine and Public Health about 25 years ago. The inventors included Charles Mistretta of medical physics, and two professor of radiology: Frank Korosec and Thomas Grist.

3D TRICKS joins a long procession of health-giving, profitable inventions from Radiology and Medical Physics, and it elaborated on a major UW-Madison imaging advance called digital subtraction angiography. Invented in the late-1970s by Mistretta and his students, DSA makes a lucid picture of blood vessels and any abnormalities by subtracting a normal X-ray from one taken with an opaque tracer in the bloodstream.

By now, the process “has been used millions of times worldwide,” to diagnose blood-flow problems in the brain, kidney, liver and limbs, says Mistretta. “It’s now taken for granted. I don’t know if people even remember how important that was.”

DSA’s real-time images supported a wide range of procedures to correct blood vessel problems. More broadly, Mistretta says, “It was probably the major stimulus for the development of interventional radiology,” the medical specialty that uses various types of images to guide internal surgery, speeding recovery for treatment of stroke, cancer and kidney disease, among many others. “Clearly you could not do this without real-time capability to see where you were going inside the body,” says Mistretta.

The advance in digital subtraction angiography added up to cascading benefits, says David Ende, a cardiologist at UW Health.  “You end up with an image of exactly what you want to see without any interference. And subtraction requires less dye, which can be toxic to the kidney, and less radiation, so it is safer for patients, while still producing a much clearer image in essentially real time. DSA was certainly a significant step in interventional radiology, and a major safety step for patients.”

3D TRICKS, like many other UW-Madison inventions, was licensed by the Wisconsin Alumni Research Foundation. “GE took it and disseminated it throughout the world,” Grist says.

A surprising portion of the radiology-medical physics story at UW-Madison returns to GE. For example, medical physics professor Richard Mazess invented scanners to detect osteoporosis in the 1970s. In 2000, he sold his spinoff, called Lunar Radiation, Inc. to GE Healthcare. The bone-density scanners are still branded Lunar and still made in Madison.

GE Healthcare has more than 46,000 employees worldwide, including 5,900 in Wisconsin. In Waukesha, GE makes a wide range of scanners that detect x-rays, magnetic resonance and tracer chemicals using PET.

Funding academic researchers is a straightforward business decision, says Debatin, who was a diagnostic radiologist before being chosen to head technology development at GE Healthcare in Waukesha. “If we want to drive innovation, we need input from the outside, which is particularly true for something as dynamic as medical physics.”

Grist, who now chairs radiology, got in on the ground floor when the revolutionary ability of magnetic resonance to image “soft tissue” like brains, muscles and cartilage was being developed for the clinic.  In the summer of 1982, Grist worked at GE Healthcare while a medical student at Marquette University. When he asked a company friend about MR, Grist recalls his response: “Yesterday, I was appointed head of system engineering for MR. What do you know about it?”

Grist spent part of the next year with GE’s fast-growing MR business, which, he says, “started a professional career in development of MR,” which included co-inventing TRICKS.

Today, in partnership with GE and other manufacturers of diagnostic instruments, researcher in UW-Madison’s medical physics and radiology departments continue to invent new ways for patients to benefit from high-tech medical machines:

UW-Madison experts are also studying new combination scanners. For example, the PET/MR scanner, which looks at soft tissue (MR) and cells marked with tracers (PET). With the combination, “You can get information about a tumor (or other disease) that you would not be able to get with MRI or PET scanners alone,” says Korosec.

The new devices are keeping UW-Madison researcher at the forefront of medical imaging. Researchers invent hardware and software, and demonstrate whether and how these technological advances bring real benefits to patients. “Sites with this cutting-edge equipment have to blaze the trail, to show why this equipment is important,” says Alan McMillan, an associate scientist in radiology.

Some of the latest, greatest medical imaging devices in the world actually “live” in University Hospital; serving today’s patients in the morning while helping researchers invent and evaluate new ways to benefit tomorrow’s patients in the afternoon.

These instruments “may be purchased at a steep discount, and some equipment is provided to us in exchange for access to our intellectual property and research effort,” says Grist.  “There is always a negotiated fair exchange of value between the involved parties.”

And the benefits of these inventions to people can’t be forgotten. John Wiley, after all, rose to assistant professor of physics to provost to chancellor, and all along he remained a firm believer in the University’s role in developing technology to benefit individuals and society. “When John was provost,’ says Grist, “he made some decisions to support our research program. So you could say he indirectly supported this work, long before he benefited as a patient. These developments take a long time, and the benefits can’t be predicted. But they are real.”